Julia Child has been a lifelong hero of mine. She was magical, even to a kid in the 80s. Her unique voice and her charming ways were enough to win me over as a tyke. She made cooking seem completely within my grasp - as a 7 year old. Julia's personality percolated through the screen, like you were right there in the kitchen with her. She was funny, quick to laugh, unafraid to show her flaws, lovable in every way. I distinctly remember the first time my Mom and I made this recipe - Julia Child's favorite brownies - my admiration of the legend only deepened.

Back when we were kids, my parents didn't have cable. We had the five basic channels, and each of us kids got to choose a single half hour television show that was "ours." Otherwise, we watched what Mom and Dad watched at night, or we were expected to read, do homework, play outside, or otherwise entertain ourselves. Even then, I loved to cook, so my shows of choice were The Frugal Gourmet, Yan Can Cook, and of course, Dinner at Julia's.

From her patient (and arguably hilarious) tutelage, I learned how to properly fry an egg. I learned why my Mom refused to jump on the margarine train and instead insisted on eating real butter. I learned that everyone makes mistakes in the kitchen, even the famous Julia Child. And I learned early on that a career in food was a real possibility.

Julia - The Woman, The Myth, The Legend

While I was enamored with Julia as a child, it wasn't until later in life that I learned what a truly incredible woman she was. I vaguely remember her being inducted into the Culinary Institute of America's Hall of Fame when I was 8 years old. What I didn't know at the time was that she was the first woman to ever hold that honor. That same year, she earned the Presidential Medal of Freedom from George H.W. Bush, which is the highest civilian honor of the United States.

But 1993 was just a single year in the history of Julia's legacy. Later in life, I learned that she actually worked for the OSS in World War II, which predated the CIA. I was completely shocked! In college, I studied Political Science and International Studies with a focus on War Theory, and was planning on pursuing a life in intelligence. This childhood idol of mine, who I only knew for her cooking abilities, was actually an OG [email protected]$$ who served her country. It was through this unusual job that she met her future husband, Paul, whose post in France during the 50s inadvertently changed the American food landscape forever.

Julia achieved an incredible amount during her career as a chef, beginning with graduating Le Cordon Bleu in 1951, to starting her own cooking school for Americans with two friends Louisette Bertholle and Simone Beck that same year. Les Trois Gourmandes (Child, Bertholle and Beck) were also credited with bringing French cooking to the American landscape with their 1961 publication, "Mastering the Art of French Cooking."

Over the next several decades Julia starred in 14 different cooking shows and wrote or co-authored 18 different books. Her first show, The French Chef, was the first television program that was close captioned for the deaf in 1972. She started a charitable foundation. She earned honorary doctorates from several universities, including Harvard. No matter how you slice it, Julia Child was a pioneer and champion for women (and gastronomes) everywhere.

The supremely decadent texture of Julia Child's brownies is achieved because of her egg technique. While half of the egg mixture gets tempered into the melted chocolate and butter base, the other half requires that you mix the heck out of them to incorporate a ton of air. This is a situation where I highly recommend using either a hand- or stand-mixer, unless you're really looking to get an arm workout. The eggs should be beaten with the sugar until they at least double in size, becoming quite pale and aerated.

But here's the most important part: once the eggs are light and fluffy, you want them to stay light and fluffy. All of the air is what gives these brownies their magnificent melty centers. Be careful to truly fold your batter when adding these eggs, mixing until almost combined, and then folding in the flour until just combined. This is not a difficult recipe by any means. It just takes a little patience to bring the ingredients together without losing their loft.

Also, while you may opt to put some parchment in the bottom of your baking tin, do not butter it. The recipe clearly states that the batter should go in an ungreased baking dish. I have made the mistake of greasing mine in the past, and the result isn't pretty. Follow Queen Julia's dictates, and you'll be just fine.

Julia herself wrote the following about these brownies.

Those who are passionate about brownies argue in defense of their favorite type, cakey or fudgey. If you're a cakey fan, go on to another recipe. These are the epitome of soft, dark baked-just-until-barely-set brownies. Their creamy texture makes them seem wildly luxurious and very much a treat to be meted out in small servings (just small enough for a scoop of ice cream and some chocolate sauce).

Y'all. She was not kidding around. Julia Child's brownies are the most decadent, richest brownies I have ever put in my mouth. They have a light, crisp top and an almost unconscionably chocolate-y, melt-in-your-mouth body. They have been a family favorite recipe for decades. If you are a fan of all things chocolate, these should immediately become a part of your repertoire. If you're looking for a way to celebrate Julia Child today, this recipe is sure to do it. After all, they were Julia's favorite brownies! 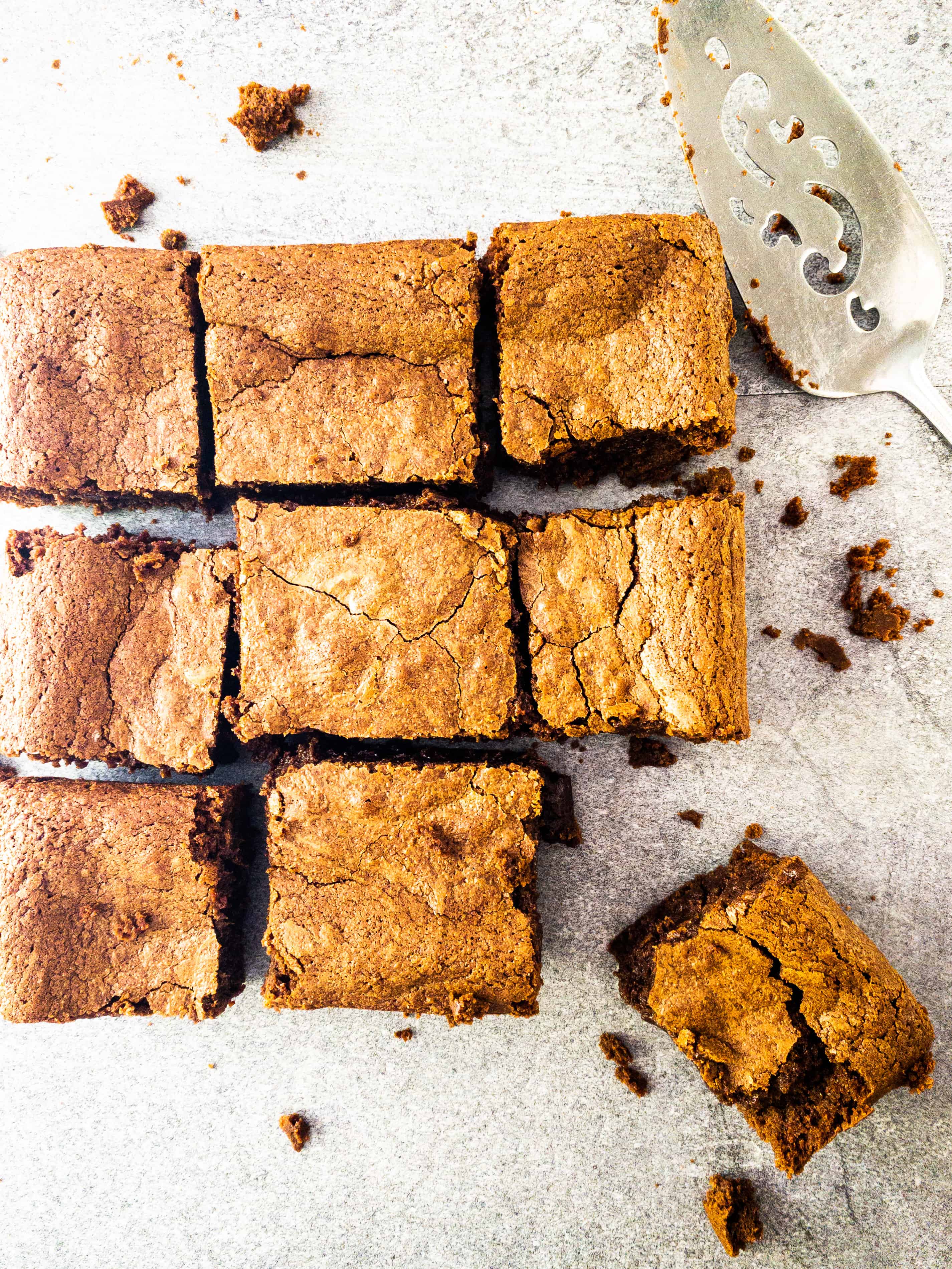 Recipe from Baking with Julia by Julia Child. These brownies are extra decadent and fudgy, so even 1/12th of the pan might be too much for the faint of heart. I doubt you'll hate it if you add a scoop of vanilla, coffee or salted caramel ice cream to the top. I only had an 8x8 baking pan, so they took about 6 extra minutes to bake. When you pull them out of the oven, you don't want a ton of jiggle, just a little bit in the very center.  While you don't want to butter the pan, a square of parchment might be useful for getting all the goodies out without any sticking.