If you grew up thinking lamb was just for special occasions, let me disabuse you of that notion. This Lamb and Eggplant Shepherd's pie is comfort food at its finest, with all the flavors of classic Greek Moussaka mixed with my all-time favorite starch: mashed potatoes. While it is a bit more intensive than a weeknight meal, I guarantee it is worth the effort.

My Auntie Steff is Greek, and growing up, we were exposed to many of her specialties from chicken Kiev to leg of lamb, baklava to souvlaki. One of my favorites, though, was the casserole known as Moussaka which was basically the Greek version of lasagne. Layers of eggplant, a tomato lamb quasi-bolognese and a thick layer of bechamel to top it all off. This Lamb and Eggplant Cottage Pie is my homage to the Greek flavors of my childhood.

Moussaka, on the other hand, is native to the Balkans and Middle Mediterranean regions. The most commonly known here in the states is a Greek version made with ground meat (often lamb) in a tomato sauce, layered between grilled sheets of eggplant and topped with a thick coating of an egg enriched béchamel.

This lamb eggplant cottage pie is a kind of mashup between Moussaka and Shepherd's pie. I went for a tomato based sauce in the tradition of an Italian bolognese, but maintained the Greek spices of cinnamon and oregano that are typical of Moussaka. I also cubed the eggplant to act more like pieces of meat than layer dividers, and used mashed potatoes in lieu of béchamel.

Eggplant often gets a bad wrap for being bitter. What many people fail to realize is that simply salting your eggplant and allowing it to sweat will remove that bitterness without much effort.

Set up a colander over your sink and add your eggplant cubes. Next, sprinkle a couple of five finger pinches of kosher salt over them from a height of about 12 inches. Now toss the eggplant to get the salt all over it, then weight it down with some plates loaded with cans of food.

TIP: Is your colander too small to fit a plate into? Don't fret. Simply make a trip to the sink every 10ish minutes to press the eggplant down with your hand to encourage water to release from the eggplant.

In the meantime, get your potatoes in some salted water in a large saucepan and get started on your bolognese. By the time the bolognese is ready to sit and simmer, your eggplant should be ready for the next step.

After about 30 minutes, your eggplant should be good to go. Give it a rinse with some cool water and press it out once more. Now toss it with olive oil, mint, oregano and a bit more salt and pepper, then spread it out in a single layer on a parchment lined sheet tray.

TIP: Don't crowd the eggplant while it roasts, or you may end up with soggy eggplant. If there isn't enough room for airflow, it'll end up steaming instead. If your sheet pan looks crowded, either work in batches or use two separate sheet pans.

Roast the eggplant for about 15 minutes at 425F, then pull it out of the oven and flip as many pieces as you can. Return to the oven for another 10-15 minutes, until some golden and charred pieces are evident. Turn the oven down to 350F and set the eggplant aside.

How to Make Tomato Lamb Bolognese

While the sauce does take a bit of time and love, it is actually quite simple. First up, dust off your trusty dutch oven or heavy bottomed large saucepan. Heat just the smallest smidge of olive oil in the bottom until shimmering - this will help you tell when the pan is hot enough to add the meat without having it stick.

Tip your meat in with a five fingered pinch of salt and break it up with a sturdy spoon or spatula. Cook until it is no longer pink, then drain all but one tablespoon of fat from the pan.

Next up, add your mirepoix and another pinch of salt and cook until the vegetables are beginning to soften. This usually takes about 5-7 minutes. Now add in the garlic and stir until fragrant, 30 seconds to a minute.

Add the wine and cook until the liquid is reduced by about half. It took me about 8 minutes to get to that point.

Finally, add the diced tomatoes (and the juice they came in!), cream and the remaining herbs and spices. Give it all a good stir to coat everything, then allow it to simmer until most of the liquid has evaporated. Remove cinnamon sticks and bay leaves.

As your sauce is cooking and the eggplant is roasting, turn the potatoes on to boil.

TIP: If you're working ahead, you can make the tomato lamb sauce up to a week ahead and keep it in the fridge until you complete the cottage pie assembly. The bolognese will also last for up to 6 months in the freezer.

How to Assemble and Bake the Lamb and Eggplant Shepherd's Pie

By the time your sauce is done and your eggplant is roasted, your potatoes should be fork tender. Drain them, then add the butter to the pot. Mash, and if necessary, add a bit more cream to achieve the appropriate level of creaminess that you desire. Season with salt and pepper to your tasting.

In an ungreased 9 x 13 pan, first layer your eggplant evenly. Top it with the tomato lamb bolognese. Finish it off with your mashed potatoes, swirling pretty patterns on them with the back of a spoon.

TIP: If you are making this ahead, now is a good place to stop! The Moussaka Shepherd's Pie should easily refrigerate for up to 5 days at this point, or freeze for up to a month.

Cover the Shepherd's Pie with foil, then pop it in the 350F oven for about 30 minutes, until the sauce is bubbling up at the edges of the potatoes. YUM!

Remove from the oven and take off the foil. Switch the oven to broil on high (500F) then return the cottage pie to the oven on the top rack for 3-8 minutes, until the edges of the potatoes are beginning to catch a little and the top looks lightly golden.

Let the baked Shepherd's Pie rest for about 5-7 minutes to allow it to reincorporate all of the yummy sauces, then scoop hefty spoonfuls out onto plates and serve with a simple side salad. Enjoy!

TIP: If you prefer, you can easily create individual portions or half sized portions of the lamb and eggplant shepherd's pie by using smaller baking dishes. This is great for parties (Thanksgiving, anyone?) or when you want to save half the batch in the freezer.

Can I substitute something else for the lamb?

While I love the gamey taste of lamb, I totally get that it isn't for everyone. You could absolutely sub ground beef in place of the lamb.

Or, go vegetarian by using a mix of oyster, cremini and shiitake mushrooms that you pulse into a paste in the food processor. The mushrooms will help to replicate some of the umami gaminess of the lamb really well.

I'd even venture to say that Impossible Meat or Beyond Meat could yield a tasty substitute, but I have yet to try them in a bolognese preparation.

Can I make this Moussaka Shepherd's Pie ahead of time?

Absolutely! You can either assemble the whole thing and pop it in the fridge or freezer to bake later, or you can make the lamb bolognese ahead of time and deal with the other components later.

How should I serve Lamb and Eggplant Shepherd's Pie?

Shepherd's Pie is rich and hearty, so we like to serve ours with a simple side salad. That said, you could easily just eat a big ol' bowl of the Shepherd's Pie all by itself. You'll hear exactly zero judgement from me.

Need some more sweater weather inspiration? Check out these other warming recipes: 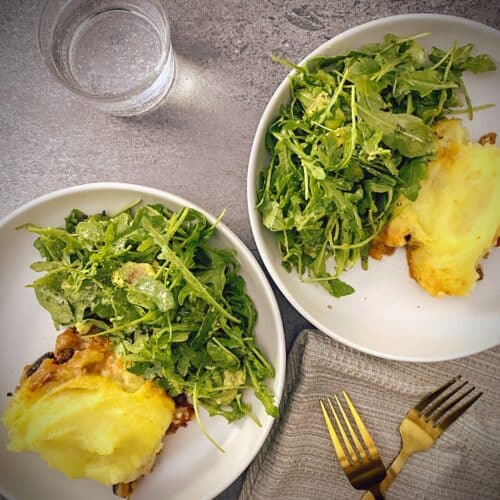 This hearty casserole style dish is jam packed with vegetables, ground lamb and covered with a layer of creamy mashed potatoes. Perfectly suited for those nights when you need real comfort food, this Shepherd's Pie has all the flavors of Greek Moussaka plus the addition of mashies. While it takes some time to prepare, this is fusion at its best!
5 from 2 votes
Print Recipe Pin Recipe
Prep Time 30 mins
Cook Time 45 mins
Bake Time 35 mins
Total Time 1 hr 50 mins
Course Dinner, Main Course
Cuisine British, Fusion, Greek
Servings 8
Calories 505 kcal