While I am now a most-likely-permanent Nashvillian, I grew up in California where fusion cuisine reigns supreme. So when the feeling hit me last week that I should make a Korean inspired taco with my Costco portion of kimchi, I decided to roll with it. I mean, if the idea is good enough for Roy Choi, then it is most certainly good enough for a humble home cook like me. So I set about trying to recreate a deliciously sticky sweet marinade for my skirt steak and ran with it. A few tries later, and these Korean Inspired BBQ Steak Tacos are a new favorite in our house.

On my first attempt, I tried just using the Soy Vey Veri Veri Teriyaki as my marinade, with a little extra garlic and ginger. But it was missing something. When I was workshopping the idea with my brother Luke, he was the one that suggested I go the bulgogi route. After investigating, I found out that a primary ingredient in bulgogi is pear. Who knew??

While I was fresh outta pears after my Fruit Crumble adventures, I realized I had some GoGoSqueez packets of applesauce and figured they'd make a close enough approximation. So that became the go-to marinade: store bought teriyaki, some applesauce, ginger and garlic. SO SIMPLE! Literally anyone can make it in minutes. These Korean tacos are something you could easily make. I promise.

Next up were the accoutrements. On my first round I made a Gochujang Yum Yum sauce, which was pretty great. But then I realized that just by stirring the two together didn't add any extra oomph, so I kept them separate. I am the kind of person who likes my bites to be slightly different every time. In this regard, two sauces are better than one.

I also only used avocado slices on the first go round, which was great, but again, I wanted more depth of flavor. More interest. More yum! So last night, I made a guacamole-esque mash of avocado, ginger, garlic, soy sauce, rice wine vinegar, lime juice, jalapeno, some mashed mango and more gochujang.

While I'm not sure whether mango is part of traditional Korean cuisine, that sauce was fire. It had all the flavor elements to really pull the dish together - sweet, salty, creamy, umami, spicy yum-ness. Now, mind you, it's humble looking AF. The red of the gochujang and the orange of the mango mixed with the green avocado turned the mash into a strange color. Don't worry though. I just put it on the tortilla first so I could load up all of the other beautiful elements on top. And it was totally worth it. These Korean tacos were the stuff of dreams.

All that was left to add was some chopped up kimchi for that spicy Korean funk that I adore, a few extra slices of mango for brightness, and some cilantro and green onion to finish it all off. It was SO GOOD. My only regrets are that a.) I can't seem to find those massive burrito sized tortillas that restaurants seem to have and b.) that I didn't think to make some of my kimchi fried rice* to throw in there as a burrito, and c.) I should've chopped the steak smaller for ease of consumption.

*Scroll to the second recipe for that link to work!

Luckily, there's no shortage of days that I'll be able to cook in the near future, so I'll just have to wait until next week. Beef Bulgogi Burritos?? Even the alliteration is appealing. I'll let you know how it goes. Until next time, friends! I hope you enjoy this as much as we did.

If you want more recipe inspiration, be sure to sign up for my email list to get recipes delivered straight to your inbox. If you made these, be sure to rate and review them below! 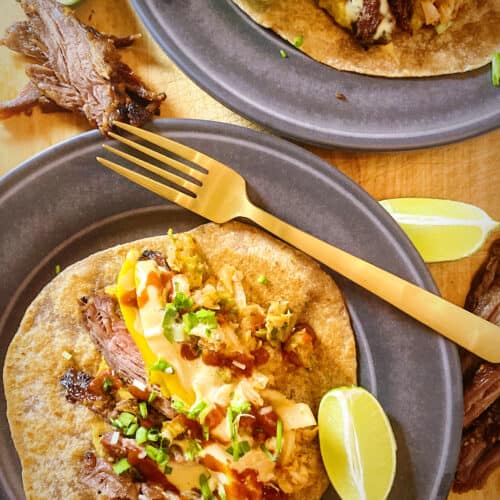