"Anyone can cook!" That's the motto of Auguste Gusteau, spiritual guide/fairy godfather in my all-time favorite animated film, Pixar's Ratatouille. What a powerful message, and so true! While I was lucky enough to grow up in a household where cooking dinner was the norm, I know the idea of cooking gives a lot of people anxiety. Y'all, I'm here to further Gusteau's message. I truly believe that literally anyone can cook, and cook well! This Ratatouille-style ratatouille is proof - even though it looks fancy AF, it requires just a handful of ingredients, a sharp knife and a bit of patience.

I'd like to dispel some myths about cooking. While there are definitely some recipes out there that require a strict adherence to the letter of the instructions, I can almost guarantee that any *cooking* recipe on this site is not one of them. What I love about cooking is that you can ad-lib based on the ingredients you have on hand, your own personal flair, and the amount of time you're willing to put into creating something. If you've spent any time on this site, you know I'm guilty of using a lot of kitchen cheats and hacks to get things to the table with less fuss.

Baking, however, does require strict adherence to the recipe. There's a lot more science involved in getting baked goods to do the crazy alchemy of becoming a cake, cookie, soufflé or bread. That's not to say that you can't riff with baking recipes, it's just that until you have a deeper grasp of the science behind all those chemical reactions, it's generally best to stick to the recipe. Things like add-ins (e.g. chocolate chips, nuts, dried fruits) are an awesome way to customize recipes until you get the hang of it.

Ways to improvise this dish

While ratatouille itself is a classic French dish with a predictable flavor profile, the style of Ratatouille's dish is a tian, which is easily adaptable to other applications. Think of a tian as a kind of gratin, but without added liquid. In other words, it's just super thin slices of vegetables artfully arranged in a shallow baking dish and baked.

While this version sticks to the traditional ratatouille flavors of eggplant, zucchini, bell pepper and tomato, you could certainly achieve a similarly beautiful result with other veggies you can cut into rounds like potatoes, sweet potatoes, or onions. And even though not technically a tian, I'd argue that something like a tarte tatin (think the French version of an upside down cake) uses the same concept.

So if you want to shake things up, feel free to experiment! You could use a jarred tomato based sauce if you're short on time or don't have things on hand to make your own. You could use a salsa to make a TexMex version and switch in cilantro for the basil. Feeling indulgent? Try using a bechamel or mornay as your base sauce. You can also change up the kind of cheese you serve it with. While I love goat cheese, maybe you're more of a ricotta or mascarpone or burrata lover. Or try adding parmesan before you bake it. The options are nearly endless!

While making this dish takes a little bit of time (about 20 minutes of veggie prep and 20 minutes of arranging for me), I can guarantee it's not very hard if you have a bit of patience. I highly recommend you pour yourself a glass of wine and turn on your favorite playlist while you arrange it - it makes the time spent go by so much more quickly!

The most important thing to remember is to get the vegetables cut to the same thickness. I personally love using a mandoline with a 1.5mm guard for perfectly uniform pieces, but you can achieve a very similar result with a sharp knife and a cutting board. If possible, I also recommend looking for vegetables that are roughly the same diameter, or cutting larger elements like the eggplant into quarters to match your other veggies.

Once you slice everything, it's easiest if you keep the veggies in their own separate piles. Then, acting like you're playing a game of poker (or Go Fish!), arrange a single fanned out grouping of veggies in your hand. Last night, I had more eggplant than anything else, so my arrangement was as follows: eggplant-tomato-eggplant-zucchini-eggplant-summer squash-eggplant. With your sauce on the bottom of the cooking vessel, spread your hand of vegetable cards against the outside edge. Continue around and around in a nautilus shell/spiral pattern until you get to the center.

That wasn't so bad, right?

So, it may have taken a little bit of time, but look how pretty it is! And honestly, once you start getting in the groove, it's super satisfying. Joe told me it was akin to an adult coloring book or color-by-numbers. I couldn't agree more. It was soothing and offered the instant gratification of putting things in order. If you have any kind of organizational neuroses like I do, I'd bet this process will set your heart and mind at ease.

All that's left to do is sprinkle some salt and pepper and brush it with some olive oil (I flavored mine with fresh basil, thyme, oregano and garlic), cover it with foil and pop it in the oven. I served mine with some softened goat cheese and garlic bread batons for wiping up the sauce, but you could easily serve yours over couscous, rice, orzo or toast. It would also be fabulous with a fried egg on top. I'll probably use this as a side dish at Christmas, because look at those colors!

In any event, I hope you remember: anyone can cook, and that includes you! Just because this looks fancy, it doesn't mean that it's hard to do. Just have fun, be patient and trust yourself. I know you can do it! Until next time friends, happy cooking!

If you're looking for more vegetarian recipe inspiration, check out these other recipes:

If you want recipe inspiration and grocery recommendations delivered straight to your inbox, be sure to get on my mailing list! 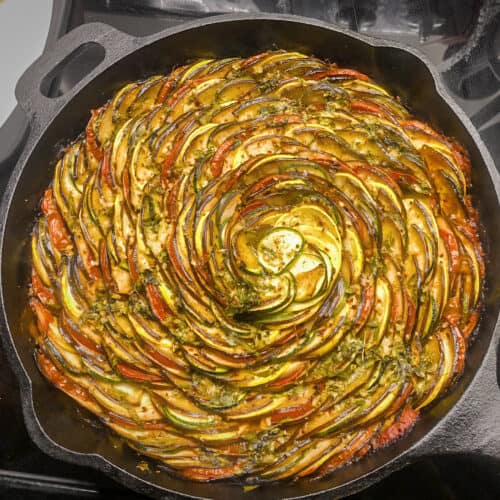 Adapted from Tasty. Try to achieve the same size/shape for all vegetables. Since it's easier to find zucchini, summer squash and tomatoes that are roughly the same diameter, you may need to cut your eggplant into thirds or quarters lengthwise to achieve a uniform size.  A mandoline will make it easier to achieve uniform thickness in your cuts, but you can also use a chef's knife if you don't have one. Watch your fingers!! I used the 1.5mm guard, so my vegetables were VERY thin. You may need to adjust cooking times if your vegetables are much thicker. If you want this to be vegan/Paleo/Whole30, omit the cheese in final serving.

Hey y'all! My name is Ashley, and I'm the Grocery Addict. I'm here to share my best time saving tips, tricks and grocery hacks to make being the CFO (Chief Food Officer) of your family a little easier. All of my recipes are designed for real, busy people who want to eat healthy and delicious grub. I can't wait to see you in the kitchen!