You already know I have a problem. When I see new grocery items, I HAVE to buy them. It’s a sickness. But in this case, it paid off in a big way. And it led me to making some of the best corn chowder I've ever made.

I’m sure you’re already familiar with Trader Joe’s Everything But the Bagel Seasoning. (If you’re not, get on that train. It’s awesome for spicing up your lox, pouring into plain yogurt for a savory dip, putting on your popcorn for a bit of interest, really just about anything you’d want the “Everything” bagel flavor on. In fact, Trader Joe's customers voted it as their number one favorite product in 2019. That should tell you something.)

Every time I see a new spice blend in TJ’s, I know I have to try it. Even when the product I’m buying is called Vegan Chicken-less Seasoning Salt. Never in my wildest dreams would I have dreamt up this product, but damn am I glad that someone else did.

After reading TJ’s website when I got home with my spoils, I learned that Chicken Salt is apparently all the rage in Australia, meant originally to help home cooks make a better roast chicken by basically creating a seasoning salt that mimics the flavors of bouillon. Made with warming spices like onion and garlic powder, turmeric, ginger, black pepper, as well as sea salt and celery seed, this little fella packs a big punch and is both vegan and kosher to boot.

Our first application of this magical substance was on popcorn. It was delicious. We then tried it on french fries. Guess what? Delicious. Want to eat that packet of ramen without all the MSG? Sub in a few teaspoons of this bad boy and you won’t be disappointed. We’ve put it in our breakfast potatoes. We’ve sauteed our cauliflower in it. And y’all. This stuff just won’t quit. For just $1.99, it is the stuff of dreams.

On the same fateful day where I first found the Vegan Chicken-less Seasoning Salt, another TJ’s gem caught my eye. I have four words for you: Everything But The Elote. If you, like me (and my bosom buddy Amy), are obsessed with the delight that is Mexican street corn a.k.a. elote and can happily house cob after cob of the stuff while abandoning all “ladylike” eating etiquette, slathering our faces and hands in oil and corn juice and getting kernels stuck in our teeth while slurping our way down the rows of kernels, then this little jar is for you.

A delightful combination of all the flavors you’d find on elote including chile pepper, Parmesan cheese, chipotle powder, cumin, dried cilantro, sea salt, as well as thoughtful additions like cane sugar and corn flour to evince the same flavor as corn itself, it is worth every penny of the $2.49 it costs. I’ve used it on popcorn, to flavor up my cornbread, to make compound butter to put on said cornbread, to flavor chicken tenders and corn pancakes, and most recently, to make corn chowder. This stuff is delicious.

In case you need another reason to try these seasonings out (if popcorn flavorings aren’t enough of a selling point for you, you drive a hard bargain), I have a recipe for Corn Chowder that I made last week using both, and y’all. It was bangin'. Joe went back for THIRDS. It was so good, so summery, and got us at least a little excited about the hot humid weather that is sure to come. GET THEM NOW (or on your next planned grocery trip, because we’re socially distancing right now). You won’t be sad. Promise. 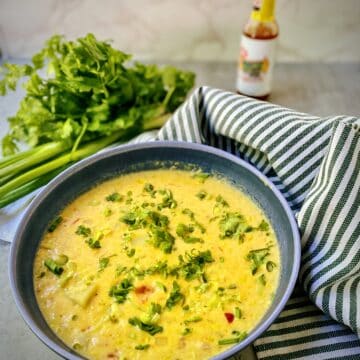