There's almost nothing better than potatoes in my book. For this decadent side, they get the star treatment with a creamy, cheesy sauce and sweet, anise scented caramelized fennel. Serve this Potato Fennel Gratin alongside my Marmite Mustard Leg of Lamb for a show stopping meal that is simple and easy. Christmas came early for you, my friends!

If you're in the market for a way to dress up the humble spud, look no further than this easy potato gratin recipe. Packed with salty, nutty parmesan, tender wax potatoes and delicious caramelized fennel, there's honestly nothing better. It took all of my self control not to eat the entire pan, and as a bonus, it only took me 15 minutes to assemble.

I love entertaining. Hosting people in my home is one of my favorite things - right up there next to cuddling up with a mug of tea and a good book on a rainy day or holding Joe's hand on a leisurely walk through the forest. While I've had plenty of time to entertain this year, COVID has put a major damper on our ability to have anyone over.

Now that Christmas is knocking on our door, we've decided to keep things pretty low-key. That said, Joe's Mom, Dad and brother Sean (who Joe picks up from his parents' house every day) are going to join us in the festivities. Since it has been SO LONG since I've been able to host anyone, I wanted to create a super low-key menu so I can focus on being present with our family rather than bustling away in the kitchen.

This super simple Potato Fennel Gratin is absolutely perfect for my pared down holiday spread. It requires just a few simple ingredients, can be assembled ahead of time (in just 15 minutes, no less!) and is good enough to lick the plate. Do yourself a favor and put this yummy side on your holiday menu.

What is "Gratin" Anyway?

The French word gratin (pronounced "graw-TEN") usually refers to a specific method of cooking. Generally speaking, it refers to a dish with a browned crust, most often achieved with breadcrumbs or cheese. Potato Gratin is simply the term for baked sliced potatoes with a cheesy crust.

You may know potato gratin by another name. Also known as scalloped potatoes, funeral potatoes or au gratin potatoes, the results are all delicious. I mean, is there anything better than potatoes with cheese and cream? No matter what you call it, this dish is comfort food to the max.

In this gratin recipe, thin slices of potatoes are layered with caramelized fennel, parmesan and cream, then baked to golden perfection. And unlike some other potatoes au gratin recipes, there's no need to pre-cook your potatoes. Bonus!

In some instances, "gratin" can also refer to the baking dish, which is usually oblong and shallow. That said, any casserole dish will do the trick just fine. I personally use a pie dish for a bit of extra color and ornamentation. It also happens to be the perfect size for a party of 5 or 6.

Now that we know the terminology, let's get down to cooking!

How to Perfectly Caramelize Fennel

The thing that sets this potato gratin recipe apart from any other that I've tried is the addition of caramelized fennel. Done properly, caramelized fennel adds a sweet anise flavor to the final dish and lends a textural richness similar to caramelized onions.

While making caramelized fennel isn't hard, it does require just a bit of patience. Oh, and butter. Because butter makes everything better.

First up, thinly slice your fennel bulbs. Cut them into vertical quarters, then slice each vertically. If you're lucky enough to have found fennel with the fronds still attached, set them aside for later. They make a pretty garnish when chopped, similar to dill! You can also save them for later use.

Next, melt some butter in a heavy bottomed sauté pan.

When the butter begins to bubble, add the sliced fennel. Don't worry if it looks quite full. Much like sautéed onions, the fennel will lose quite a bit of volume as they cook. Add a hefty 5-finger pinch of kosher salt to the raw fennel to encourage sweating.

Cook, stirring occasionally, until the fennel pieces are becoming a bit soft and translucent on the edges.

Add minced garlic and stir, cooking until fragrant. This usually takes about 30-45 seconds.

Add your stock or broth to the pan. Bring to a simmer, then let the magic happen. Stir occasionally over the next 10 or so minutes, until the stock evaporates.

You should be left with super soft and lightly golden pieces of fennel. All liquid should be evaporated from the bottom of the pan. Taste a bit, then season with salt and pepper as necessary.

TIP: Caramelized fennel can be made ahead of time. It will keep covered in the refrigerator for up to a week, or in the freezer for up to a month. Feel free to make extra and add it to sandwiches, omelettes or pasta for an instant flavor boost.

How to Assemble the Gratin

Now that the fennel is done, it's time to assemble the potato gratin. First up, you'll need to prep your potatoes. Wash and scrub them thoroughly - they grow in the dirt, so some is likely to be attached to the skins.

If you're using wax potatoes, there is no need to peel them. If you opt for thick skinned russets instead, make the extra effort and peel them first. Also, be sure to remove any "eyes" on the potato and any abrasions where the potato has oxidized. Slice into roughly ¼" rounds.

In the bottom of your gratin dish (or casserole dish or pie plate), spread out a single layer of potato rounds. Try to fill out as much space as you can without overlapping.

Spread out the fennel in an even layer, stretching it as far as possible. You want to have a little bit in each bite!

Top with the remaining potato rounds. Season with kosher salt and pepper again.

Top with parmesan cheese. Don't be shy! You want the end result to be bubbly and cheesy and downright decadent.

Finally, drizzle the heavy cream over the top. Pour it slowly, doing your best not to disturb the cheese layer. You want to cream to get in as many nooks and crannies as possible.

If you're working ahead, this is a great place to stop. You can cover the gratin with foil and pop it in the fridge until you're ready to bake.

If you're going straight for the finish line, cover tightly with foil and do your first bake!

How to Finish the Potato Fennel Gratin

Since we didn't parcook the potatoes ahead of time, you're going to need to do two bakes. The first should be at a lower temperature - about 325F - and should be done with a tight covering of foil. This will trap the steam from the cream and potatoes and help them cook through without browning at all. Bake for about 45 minutes during this first cook.

Remove from the oven and pierce with a fork. The potatoes will still be firmer than you would want to eat, but you should be able to pierce them with a fork. If they are too firm to achieve this, recover them and return the gratin to the oven.

Once the potatoes are firmly fork tender, remove the foil. Crank the oven to 375F, then return the gratin to the oven. Bake for another 30-45 minutes (this will depend on how many layers you have!). When the potato fennel gratin is done, the top should be golden and bubbly and the potatoes should easily yield to a fork.

TIP: Is your potato gratin browning too quickly? Lightly tent foil over the top during the second bake to prevent too much color from developing. Just be sure not to seal the foil around the edges, or the sauce may end up watery because it won't be able to evaporate at all.

Rest for 5-10 minutes, then serve hot and enjoy!

What are the best potatoes to use for gratin?

I personally love using Yukon Gold potatoes for this recipe. They're incredibly creamy and decadent tasting even before you add the cheese and cream, so they are really yummy when you add in the naughty stuff.

That said, you can easily substitute any mid to large sized wax potatoes if Yukon Golds aren't available. You could also sub in russet potatoes if you prefer, but you'll definitely want to peel them ahead of time.

Where can I find fennel bulbs? If I can't find them, what can I substitute?

While fresh fennel used to be more of a specialty item when I was growing up, it has definitely become more mainstream as of late. While I can only find it at my local Kroger some of the time, I know that Trader Joe's has it on display year round (albeit without the fronds attached). I also know that more upscale stores like Publix and Whole Foods almost always have some in stock.

That said, if you can't find any, don't fret! This yummy potato gratin would be just as delicious with the addition of some caramelized onions, shallots or leeks in place of the fennel. The flavor will be slightly different, but you'll get a similar consistency and sweetness.

Can I make this potato fennel gratin ahead of time?

Absolutely! You can get the bulk of the work out of the way by caramelizing your fennel. It will keep for a week in the fridge or up to a month in the freezer.

You can also assemble the gratin and cover it with foil to bake off the next day, leaving you with plenty of time to hang with your guests rather than slaving away in the kitchen.

How long will the leftovers last?

Technically speaking, the potato fennel gratin will last for up to a week in the fridge. That said, it's so tasty that I can almost guarantee there won't be any left past day three.

What goes well with this potato side?

My potato fennel gratin is pretty dang decadent, so I usually reserve it for the cooler months when I'm looking to food for that warm and cozy feeling. For Christmas, I'm going to pair it with my Marmite Mustard Leg of Lamb roast, Roasted Brussels Sprouts with Bacon Jam and Carrots and Parsnips with Whipped Feta.

That said, it'll pair beautifully with just about anything including pork roast, pork tenderloin, roasted chicken or turkey, rack of lamb, or even a good steak dinner. And you'll hear exactly zero guff from me if you decide to serve it to yourself as a complete meal. It's honestly that good.

Need more yummy side ideas? Check out these other recipes:

If you tried this delectable Potato and Caramelized Fennel Gratin recipe, please let me know how it turned out by commenting below! 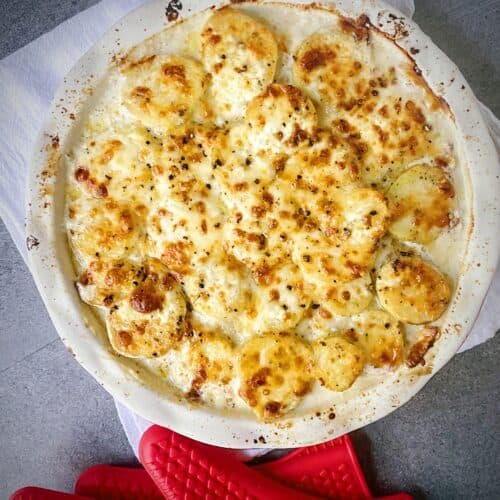