If you regularly purchase hummus, I’m sure you have seen the semi-recent curious addition of “dessert hummus” to your store. While the idea of “dessert hummus” wasn’t immediately super appealing to me, my inquisitive nature regarding all things grocery won out upon first seeing Trader Joe’s Chocolate Hummus.

Made from normal hummus ingredients, Trader Joe’s chocolate hummus boasts chickpeas, tahini, canola oil and sea salt, adding sugar and cocoa to the mix. For a mere 50 calories, 1.5 grams of fat, 5 grams of sugar with the added bonus of 2 grams of protein for each 2 tablespoon serving, dessert hummus seemed too good to be true.

My first foray into eating it was with Pretzel Thins. The chocolate flavor is pervasive, and if you can accept the true-to-hummus consistency, it’s like eating a less-sweet brownie batter. The sweetness pairs well with the salty crunchiness of pretzels, as well as with graham crackers. I was surprised to find that it tasted equally great on fresh fruit like strawberries and bananas.

My favorite application has only recently come into play, after I learned the life-altering deliciousness that is a hummus quesadilla. While this one doesn’t *technically* make it into the quesadilla category due to its lack of cheese, I promise you won’t be disappointed. I’m not sure why, but the creaminess factor of heated hummus seems tenfold to its refrigerated cousin. Enter my new favorite pandemic breakfast: Chocolate Hummus Banana Quesadilla. So simple (just 5 ingredients!), so rich and deliciously sweet, and not nearly as sinful as it tastes.

Simply heat up some unprocessed coconut oil* over medium heat till melted, throw in a whole wheat tortilla smeared with a few tablespoonfuls of chocolate hummus, slice half a banana on one half of the tortilla, sprinkle with a light dusting of cinnamon and wait for the tortilla to get nice and golden brown. Fold that sucker in half, slide it on a plate, and take yourself on a trip to Flavortown.

The bananas become sweeter as they heat up, tasting nearly caramelized as a result. The chocolate hummus melts into a velvety puddle of chocolate-y goodness. The lightly coconut flavored tortilla balanced with a sprinkle of spicy cinnamon round out the whole thing. It’s true bliss. While this has become a breakfast staple for us, it is delicious enough to stand in for dessert.

If you're not super into bananas, don't fret! You can substitute in fresh raspberries and add cream cheese dip for Chocolate Raspberry Cheesecake Quesadillas... YUM! They're also quite delicious.

While I have yet to try some of the more adventurous flavors of dessert hummus that are out there, I’m certainly more inclined to try them now. At a mere $2.50 for 8oz, Chocolate Hummus should definitely make it into your cart on your next Trader Joe’s run. 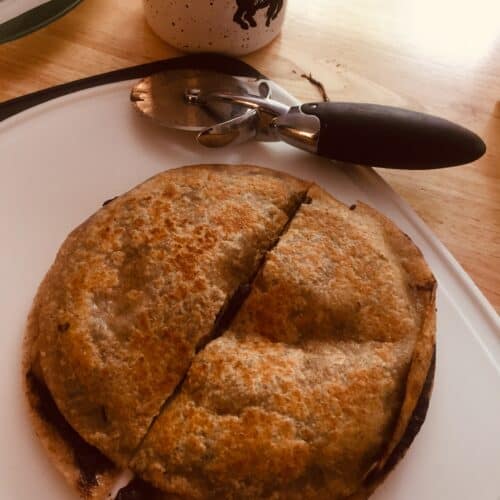 If you're not super into bananas, we have also made these substituting fresh raspberries for the bananas and adding some of my cream cheese dip for a chocolate raspberry cheesecake quesadillas... YUM!

*It doesn’t have a high smoke point, but the coconut flavor it imparts makes it our favorite breakfast oil.