We're now 5 months into this strange season of lockdown, and without my fitness minded quaran-team by my side, I've started to edge up on the scale. It's nothing dire, but I feel like my lifestyle needs some adjusting. To that end, Joe and I just got ourselves some bikes last week (hooray!), and he is embarking on another round of keto. While I personally am not ready to fully embrace a restrictive diet, I want to be a supportive wife and make sure he's set up for success in the kitchen and beyond. Between these Keto Chocolate Peanut Butter Fat Bombs and our bikes, I think we're set to turn a new page.

The slow creep of the scale can happen to the best of us.

I used to walk an average of 6 miles a day when I was working at the restaurant. When quarantine hit, I was walking 8-10 miles a day with my gals. Then when reopening started, they all went back to the office and I stayed home. I'm an active person by nature, but this new reality has led me down the path of a more sedentary lifestyle. I've put on a few (read: 10) pounds and lost some definition, and with all my quarantine cooking and baking, Joe has also put on some weight. We decided together that we want to lead healthier lives than we have in the past few months.

The major adjustments we are making together are 1.) opting out of drinking at least four nights out of the week, and 2.) starting a daily exercise routine. We both took a full week off of drinking, which considering we'd had some kind of adult beverage every night since I got laid off in March was a pretty big feat. We committed to only drinking a max of three nights each week. And we decided that since we are both busy and have a tendency to make impossible to do lists, that mornings are our best shot at getting exercise. Since we're not drinking as often or as much, earlier mornings should be a little easier.

If you're embarrassed about your weight gain, don't be. I'm a grown a$$ woman learning how to ride a bike.

Y'all. I haven't been on a bike in 26 years. That's right, I was in the 4th grade last time I tried. It has been a minute. But with a limited budget of about $150 apiece, biking seemed like our best option. So I decided to overcome my fear of injury and embarrassment and give it a try. Plus, I've always wanted a cute little cruiser with a basket to take on picnics. How can you go wrong with food + wine + blankets + outdoors? You can't. It's science.

Anyway, we got up bright and early the other day to go on our first ride. The park that is down the road from us is pretty flat, and we assumed since we were going early, we would avoid having too many people around. I strapped on my helmet (because safety first) and took a short spin around the parking lot. I had the balance part down, but my turns were a little shaky and nerve-racking. No matter, though. I'd get better with practice, right?

Come along for my first ride. It'll make you feel better.

We started on the trail. I was a little tense, especially when getting past those metal poles they put at the start of the trail to prevent motorized vehicles. I white knuckled and grimaced my way through without incident. We were on our way. The first ¾ mile was pretty straight. I was doing alright. I even called out "on your left" when passing a pedestrian. So I thought to myself, "I've got this!" And then we approached the first sharp bend in the road, which was combined with a drop in elevation. Turns out, I was not as prepared as I thought.

I was speeding up without meaning to, and the turn I was supposed to take was really sharp. My bike had the brakes where you have to back pedal to stop, which was a completely foreign concept. I mean, I was just figuring out how to pedal forward! So I did the dumb thing and tried to use my feet as my brakes, but I was going too fast to stop. My whole body tensed and I steered for the tree line, because somehow it seemed more forgiving than skidding out on asphalt. Road rash hurts. I know from experience. So I let the trees and bushes "catch me." That was just the first incident.

By the end of our piddly 2.5 mile ride, I had run into the trees three times. Once was when I almost killed a little old lady who was out for a run. (I'm super impressed by her, even more so since she was able to get out of my way in time!) I had somehow managed to get enough of an arm workout from being so tense to make me sore the next three days. And if my humiliation wasn't entirely complete, I found some branches and leaves sticking out of my helmet when I took it off. But you know what? I DID IT. So what if I have myriad minor abrasions? I'll chalk one up for the good guys. Entropy will not win. I made progress.

Whatever your diet goals, know that you've got this.

There's all kinds of diets out there. I've tried quite a few. I went vegetarian for six months, and then went vegan for another six. Then I transitioned to Atkins for the next 3 years in high school when I had to make weight for crew. Then there was the freshman 30 I gained in college. My sophomore year, a friend then recommended I read this book called Real Food by Nina Planck that informs my eating to this day. That hasn't stopped me from trying other diets, though. I like a challenge. And I like knowing that I'm stronger than my cravings.

Joe and I have both gone on the keto train in the past. We did three bouts of Whole30 in the year leading up to the wedding, but as the date approached I needed a diet plan that would allow me a little booze to take the edge off. What can I say? Mama likes to drink. And wedding stuff can be stressful. Joe lost quite a few pounds on it, while I petered out after about 3 pounds. Even though I never hit my "goal weight" for the wedding, I still felt healthy, so who cares? After all, weight is just a number, right?

Anyway, fast forward to today, nearly two years after our nuptials. I'm personally not ready to go full force into a restrictive diet on lockdown, especially since I didn't lose that much weight on it before. But Joe enjoyed keto the most out of all the diets we've tried together, so he has opted in. Since our last go, keto products have BOOMED. There's keto cereal, keto ice cream, keto shakes, you name it! But those products are also generally pretty expensive, so I'm using my WFH flexibility to come up with some treats on my own. Fat bombs were one of our favorite things last go-round, so they were my first order of business.

These Chocolate Peanut Butter Fat Bombs are a win, keto or not.

Last time we did keto, I fell in love with Lily's chocolate products. They are so good. But the trick is not to eat too much at one time. Whatever sugar alcohol they use can turn your digestive system into a war zone. Joe has a more sensitive tummy than I do, and he could barely eat any Lily's without getting in trouble. Because of this, I decided to use unsweetened baking chocolate that I would sweeten myself instead.

I also made the decision to use natural peanut butter in my ganache. While it resulted in a less smooth consistency than I would've achieved with a processed nut butter, I wanted to use the healthiest, most "real" option available. Then, to up the peanut butter flavor, I rolled the truffles in powdered peanut butter instead of cacao.

They were a huge success. Deeply chocolatey, salty sweet, and peanut buttery, these fat bombs-meet-truffles hit all the marks for a one bite dessert. If you're vegan, you can easily sub coconut cream for the heavy cream. If you want to go paleo instead of keto, sub in honey, maple syrup or agave and coconut sugar for the sugar-free maple syrup and Swerve. Allergic to peanuts? Sub in another fatty nut butter like macadamia, cashew, tahini or sunflower seed butter. Whatever you do, put these bad boys on your dessert short list. You won't regret it! Until next time, my friends. I hope you have a delicious (and healthy!) day.

Check out these other healthy recipes:

If you loved this recipe, be sure to follow me on social media for more inspiration! 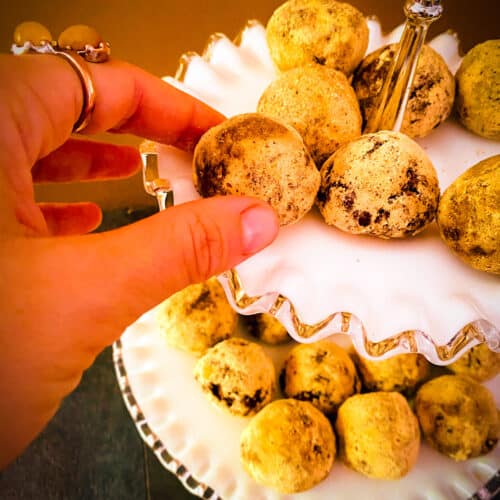 The last paragraph of my blog post gives ideas for substitutions based on your dietary needs, including vegan and paleo diets as well as peanut allergies.  Also, while these will store best (longest)  in the fridge, due to their high fat content they can be quite hard straight from the chill. They taste best when brought to room temperature before eating.