A marinated, grilled chicken breast on a soft whole wheat bun with spicy mayonnaise, American cheese, lettuce and a pepper. Fast food rarely gets better. And the homemade version is PERFECTION.

I am the first to admit: I might have a problem. This Copycat Carl's Jr. Santa Fe Chicken Sandwich is the third straight burger-looking meal I've posted to the blog. But Summer is slowly transitioning to Fall, and I've got some work to do in the burger department before the season ends.

I mentioned earlier that I've had a crazy hankering for burgers lately. Maybe its because we went from having a delightful week of nearly Fall feeling weather and we're right back in the 90s with a godawful level of humidity. I haven't had an inkling to turn on the stove at all. Or maybe it's because grilling something and slapping it between two tender pieces of a well crafted bun is heavenly. Whatever the reason, I've got a craving.

No Santa Fe East of the Mississippi

I haven't lived West of the Mississippi in quite some time. While there are some brands that translate despite different names (Dryer's and Edy's Ice Cream, Best Food's and Hellman's Mayonnaise), there are some that decidedly do not. For any of y'all that thought the big yellow star on a red background meant that Carl's Jr. and Hardee's were one and the same, I'm here to disabuse you of that notion.

The very best sandwich that Carl's Jr. had on the menu when I was growing up in Cali was the Santa Fe Chicken Sandwich. We didn't eat a ton of fast food growing up. But on the rare occasion that Mom was too tired to cook or we were flat out of time between all the kid activities, one of my favorite things to eat was that dang sandwich from Carl's Jr.

Imagine: a soft, fluffy whole wheat bun. A succulent, perfectly marinated then grilled chicken breast with a single melty slice of American Cheese. A dollop of slightly spicy adobo mayonnaise. A whole mild green chili and a single crispy piece of iceberg lettuce. It was everything.

Smack in the middle of this burger craving frenzy, I thought of my favorite burger-adjacent sandwich and I haven't been able to shake it. It isn't as though I can patiently wait for my next trip to California, because WHO KNOWS WHEN that'll happen?? My only option was to recreate the elusive Santa Fe Chicken Sandwich myself.

First up, I had to decide how to marinate the chicken breast. I'm pretty sure Carl's Jr. uses a teriyaki style marinade for all of their grilled chicken, but I opted for something more on theme. In my condiments bucket I found the perfect candidate: a homegrown and homemade Garlic Lover's Hot Sauce from my old roommate John's Aunt.

I pounded the meat to about a half inch thickness, replicating what I remembered from childhood. Because I was using full breasts, each breast would easily yield two sandwiches. Hooray! That meant for $5 of organic goodness, I'd get a full 8 sandwiches. I sprinkled them all with kosher salt and doused them in garlicky, vinegary, spicy deliciousness.

Next up was the sauce. I started out with only Hellman's and some adobo sauce from a can of chipotle chilis. It was missing something. And while this sounds totally crazy and not at all in line with the Tex Mex theme, I reached for the curry powder. Y'all, I was so proud. I had recreated the sauce to a T.

Joe fired up the grill and cooked the breasts to juicy perfection. The char marks were there and the chicken was succulent. I took the Publix-made buns, swiped a thin layer of plain mayo on and pan fried them diner-style. They were as golden and perfect as the buns at Culver's. (I know I'm mixing references here. I've lived in 7 different cities, y'all! And some buns - Culver's - are better than the rest.)

All that was left was assembly. First was the lettuce, followed by the canned whole green chili, then the chicken, then the cheese, and finally that glorious sauce. We topped it with the other half of the bun and I could barely make myself snap a few photos before digging in.

It was the PERFECT copycat. And by that, I mean it was even better than the original. The marinade made more sense with the flavors and bumped up the heat a little bit. The mayo was also a little spicier than what I remembered, but that curry powder made it taste closely related to the OG. I even used iceberg lettuce, which is almost unheard of in my house as I generally opt for the healthier and crunchier romaine. And Publix's bun and my mayo-diner-treatment?

Like Nike says, JUST DO IT. You won't be sad. And you won't have to miss your favorite fast food sandwich anymore. Till next time, friends! I hope you have a happy and delicious day.

If you like this recipe, don't forget to rate it below! 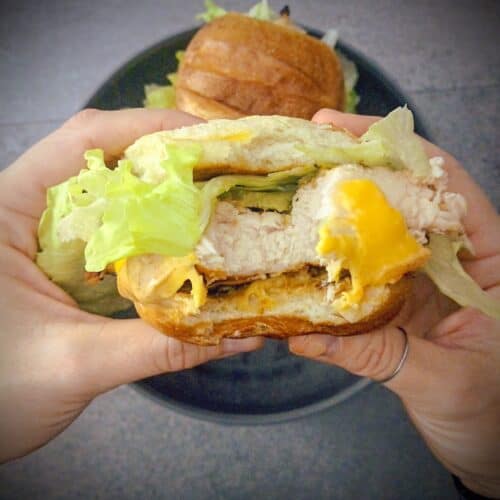