This easy Apple Cinnamon Monkey Bread is made using refrigerated biscuit dough and fresh fall apples. It is reminiscent of a bear claw, but the pull-apart mini rolls are made for easy sharing. Quit monkeying around and make this for your weekend brunch!

Apples and cinnamon are a match made in heaven. That divine pairing only gets better when united with a donut-esque pull-apart monkey bread that's been stuffed with cinnamon bun flavored filling. Oh, and that apple flavored caramel glaze that results from this recipe doesn't hurt either.

So what is monkey bread, anyway?

If you haven't heard of monkey bread yet, you're missing out. Also known as pull apart bread or bubble bread, monkey bread is made with small pieces of dough that have been individually dipped in butter and then in cinnamon sugar. The bread is then baked and served warm, with the lucky consumer pulling off individual pieces of the bread with their fingers.

It's assumed that the name "monkey bread" comes from the way this pastry is intended to be eaten. Rather than using a knife to make slices, those who eat it pull bits off with their hands like monkeys would. Cute, right?

Well, however you slice it, monkey bread is the jam. And since I'm still working my way through the apples from my anniversary apple picking adventure, it seemed only natural to throw some in the cinnamon sugary mix.

First things first: assemble your ingredients. Refrigerated biscuit dough, butter, sugar, cinnamon, brown sugar and apples are all easily found at any grocery store. If necessary, you can absolutely make a delicious monkey bread with just these ingredients.

That said, the one element that really takes this monkey bread over the top is the Cinnamon Bun Spread I recently found at Trader Joe's. Yep, you read that correctly. Cinnamon Bun Spread. How could I not buy something by that name? I'm not a monster. I'm a grocery addict.

After I impulse purchased said delicious spread, I started tooling around all the many ways I could use it. Clearly it would go well on pancakes. It'd obviously be good swirled into (or atop) oatmeal. I could probably stir it into some coffee, or spoon it over some ice cream or yogurt.

And then it hit me. It would be awesome in a breakfast pastry, and that pastry had to be apple cinnamon monkey bread. What if I stuffed some Cinnamon Bun Spread inside each of the tear away pieces? It'd be like having a donut hole sized cinnamon bun! I felt inspired.

So, while you don't need the Cinnamon Bun Spread from Trader Joe's, clearly you should get some. It'll make this Apple Cinnamon Monkey Bread that much better.

If you have a can of refrigerated biscuits at the ready, this monkey bread comes together in very little time. First up, separate the biscuits, then cut into quarters.

If you're using the Cinnamon Bun Spread (which I recommend), stretch each piece out into as big of a piece as you can without breaking the dough.

Dab about ½ teaspoon of the spread in the center of the dough, then pinch seal it shut. Now gently roll it into a ball shape. Repeat with the remaining pieces.

If you are not using the spread, simply roll each piece into a ball.

Next, dip each dough ball into the melted butter, then roll it in the cinnamon sugar to coat. Repeat with all remaining pieces.

Next, prepare your apples. Peel, core and medium dice the apples. Add the brown sugar to the leftover cinnamon sugar mix. Add the apples, then stir to coat. Pour in the remaining melted butter and stir. Sounding pretty good so far, yeah?

Spread about half of the apple cinnamon mixture atop the bottom layer. Spread it out as evenly as possible. Top with the remaining dough balls, again smooshing them a bit with your hand to get them to cover more surface area. Top with the remaining apple mixture, then bake for 50-60 minutes, or until a toothpick comes out cleanly and the top is golden brown.

TIP: If you're making this in advance, stop here. Allow the loaf to cool in the pan, then cover and refrigerate for up to a week or freeze for up to a month. Reheat in the oven at 200F until warm, then follow the remaining instructions.

Allow to cool about 15 minutes in the pan, then invert onto a serving board. Serve warm and sticky, and get ready to go nuts!

Can I add nuts?

That's a big fat HECK YEAH! If you're wanting something even more over the top, I'd suggest adding some chopped toasted pecans into the apple mix. Walnuts would also be a fine choice.

Can I substitute refrigerated cinnamon buns?

Um, why didn't I think of that?!? Yes. Yes you can. This is an especially good idea if you don't have access to Trader Joe's Cinnamon Bun Spread.

Can I make this completely from scratch?

More power to you! Just use whatever biscuit dough recipe you like best. This is my personal favorite biscuit recipe out there. Be sure to read all of Sam's tips if you're new to biscuit making, as they are super detailed and helpful.

Can I scale up this recipe for a bigger crowd?

Absolutely! You could up to quadruple the recipe if needed. However, for larger than a single tube of refrigerated biscuit dough, I recommend switching over to a bundt pan to ensure the middle pieces cook all the way through. You may also need to adjust cooking times for larger recipes.

If you tried this recipe, please rate and review it below so I know how it turned out for you. If you want more recipe inspiration delivered straight to your inbox, be sure to sign up for my email newsletter. And if you want some yummy food on your feed, be sure to follow me on Instagram, Pinterest and Facebook! 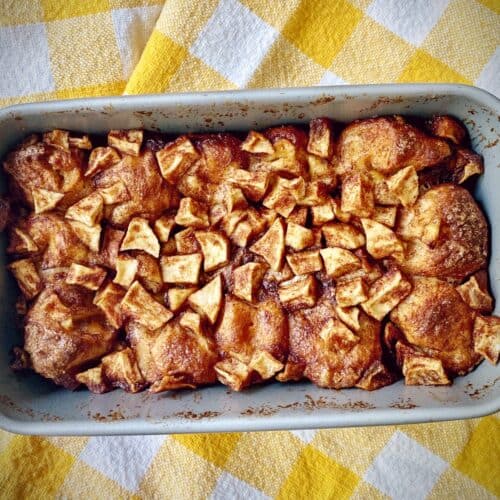