If you have only ever eaten store bought marshmallows, I'd venture to say you haven't truly lived. Melodramatic much? Maybe. But once you experience the sheer joy that is encapsulated in a melty, pillowy, perfect homemade marshmallow, you'll understand what I mean. Bonus points if you serve it up in a mug with real, homemade hot chocolate - none of that packaged stuff allowed.

As a self proclaimed Grocery Addict, you know I'm all about buying the stuff that will make it easier to get delicious food on the table at home. I love me some store bought cheats! But there are some things, these marshmallows included, that are echelons above their store bought counterparts. Spend a bit of time making them, and I can almost guarantee you won't go back to the bagged Jet-Puffed's ever again.

Making marshmallows might sound like a project that is out of your skill level. It might sound downright ridiculous to even consider making homemade marshmallows. Plus, they couldn't be all that different from store bought marshmallows, right? Wrong. I'm here to convince you that none of these things is true.

Homemade marshmallows requires a shockingly short list of ingredients, most of which I'd reckon you already have on hand. There's also no real special equipment that you need, with the exception of a candy thermometer. And the flavor and consistency of homemade marshmallows is so superior to the store bought version, they're on a different plane entirely.

Take a leap of faith with me and dedicate the next 25 minutes to making yourself some homemade marshmallows. I can pretty much promise your life will be infinitely sweeter because of it.

Ingredients and Equipment for Homemade Marshmallows

I followed Cronut master Dominique Ansel's base recipe for his light and fluffy marshmallows, adding a touch of vanilla paste to up the flavor quotient. His base recipe calls for just 4 ingredients - granulated sugar, corn syrup, egg whites and powdered gelatin. Oh, and water. So 5 ingredients if you're being a stickler.

You're also going to need at least cornstarch, though I prefer a mix of cornstarch and powdered sugar, to keep the marshmallows from sticking.

In terms of equipment, you need a heavy bottomed saucepan, a whisk or fork, a candy thermometer, a measuring cup, measuring spoons and an 8 x 8 cake pan. I'd bet you probably have just about everything you need to make marshmallows at home already, so why not experiment??

If you want to make flavored or brightly colored marshmallows, read the FAQ section for ways to incorporate more yum!

How to Make Homemade Marshmallows with Egg Whites

The way I was taught to make marshmallows is in the traditional French way - using egg whites. This method yields a softer, fluffier and altogether lighter consistency, which I absolutely adore. I also love having recipes to use up whites when I make recipes that use a ton of egg yolks (remember my banana pudding??).

First up, bring your sugar and ⅓ cup of water to a boil over medium high heat. Next, add your corn syrup. Don't stir! Let the mixture continue to boil until it reaches a temperature of 160F.

In the meantime, add the other ⅓ cup of water to your gelatin and stir to get rid of any dry parts.

Once the sugar mix comes to 160F, remove from heat and stir in the gelatin mix. It will bubble a bit, but don't fret. Like Dory says: Just keep stirrin', just keep stirrin'.

In a separate mixing bowl, add your egg whites and whip to soft peaks. If you're using a hand mixer, you can stop your bowl from spinning by dampening a kitchen towel and placing it on the counter in a ring shape. Set your bowl inside it like a nest. Neat, right?

With the mixer going, slowly pour the sugar gelatin mix into the eggs using the side of the bowl to pour it down. Keep beating until the mix becomes thick and you can see air bubbles getting trapped.

If you want to add flavoring, the last minute of beating is when to do it! I added my vanilla paste here.

Now scoop the finished marshmallow mix into a prepared 8 x 8 cake tin that you've greased with a neutral oil and heavily dusted with a 50/50 mix of cornstarch and powdered sugar. Rest for at least 3 hours before turning out and cutting.

Once the marshmallows are firm, sprinkle the top with more confectioner's sugar and cornstarch. Turn out onto a work surface that you've dusted with the same. Use a bench scraper to cut into squares. Toss with more powdered sugar and store in an airtight, dry container at room temperature.

Can I make flavored marshmallows?

You sure can! Feel free to switch out the vanilla paste and use a few drops of any number of extracts - almond, maple, coffee, orange, or peppermint all sound delicious. You can also easily add color by adding gel food coloring to the mix. If you go the peppermint route, lightly swirl some red food coloring through the mix!

My friend Jess suggested that I try a famous Minnesotan treat and dip the marshmallows in thick caramel like you would use for a candy apple. I'd also venture to say dipping them in some tempered dark chocolate would also yield a delicious bite.

Per Dominique Ansel's suggestions (this is his base recipe, after all), you can also do the following:

What is the best way to serve these marshmallows?

Use these marshmallows in any recipe that you would normally use marshmallows for. Toast them over the fire for some s'mores! (Or make my Indoor S'mores Bars if it's too cold outside.)

Add them to a mug of hot chocolate! Make a batch of crispy cereal treats! Take them and dip them in chocolate or caramel! Or both! Honestly, whatever your store bought marshmallows can do, these can do much, much better.

How long do homemade marshmallows last?

Whenever I make homemade marshmallows, I usually share with buddies because they're so dang good. I also have a tendency to up my consumption of things like hot chocolate and s'mores, so they don't often last very long at all. That said, if kept in an airtight container at a cool room temperature, marshmallows should last 3 weeks.

If you made these awesome homemade vanilla marshmallows with egg whites, please be sure to rate and review the recipe below. I'd love to know how they turned out for you! 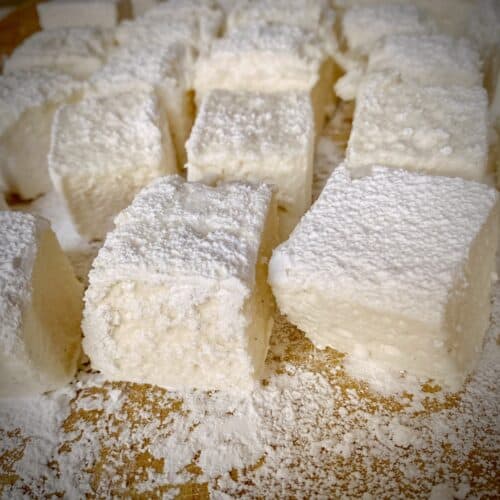